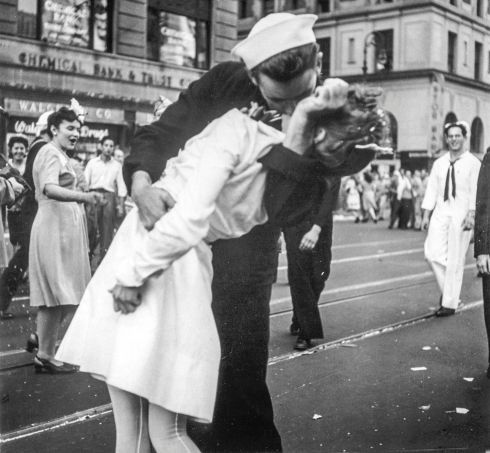 DAYTON, Ohio (Tribune News Service) — Sitting in his Performance Place condominium, Oscar Soifer, 95, holds a worn copy of a black-and-white photo taken of himself and a group of fellow U. S. Navy and Marine Corps Corpsmen in what appears to be a medical tent.

The photo was taken in about April 1945, near the start of the Battle of Okinawa, the 82-day campaign to take and hold the Japanese island of Okinawa, a major push in the Second World War’s Pacific Theater.

Soifer, a former medical Corpsman who served both in the Navy and the Marines, said he didn’t know the men in the photo all that well when the picture was taken.

“After all these years, looking at this picture, I feel I know them real well,” Soifer said, his voice thickening with grief.

VJ Day is officially remembered in the United States on Sept. 2, but it’s also remembered on August 15, the day when Japan’s surrender to the Allies was announced to the world. The official signing of the surrender documents happened on September 2, 1945, officially ending World War II.

Saturday, then, marks one occasion of the day’s 75th anniversary.

Soifer is one of the few remaining living veterans of the Pacific Theater, a cadre whose number grows smaller with each passing year.

“Unfortunately, all of the Pacific Theater veterans I knew have passed away,” said Doug Barber, a retired Centerville schools history teacher who has cultivated relationships with dozens of World War II veterans over the years. “Time is the master of us all.”

Citing Pew Research, Barber said fewer than 2% of World War II veterans remain with us, as of mid-2020.

“The sand is nearly out of the hour glass,” said Barber, a board member of the World War II Foundation, an organization dedicated to educating younger generations about the war.

“The sources will change,” said Doug Lantry, a longtime curator and historian at the National Museum of the U. S. Air Force. “It is unfortunate, but that is what time and history do. Eventually, we lose all of the firsthand living accounts.”

But VJ Day, whenever it’s celebrated, marks an epochal moment, the end of combat in World War II and the dawning of the atomic age, Lantry also noted. Nuclear weapons were first — and so far, solely — used in anger near the end of that war, against the Japanese cities of Hiroshima and Nagasaki on Aug. 6 and Aug. 9, 1945, respectively.

“Those moments are worth marking and remembering, because they help us to understand how we got to where we are now,” he added.

Soifer sat in his study, recounting what he saw and experienced in the Pacific Theater. The final nine months were some of the deadliest in the war.

“Two of those Kamikaze planes flew into our hospital ship that was all lit up (at night),” Soifer recalled, referring to Japanese pilots who intentionally crashed their planes into ships in suicide missions.

Asked if the original VJ Day came as a relief, Soifer said: “Oh hell yeah. I can’t express it, it was so wonderful.”

“When I heard about it, I was overjoyed, gladdened,” said retired U. S. Navy Commander Dean Samuel “Diz” Laird, who at 99 now lives in Walnut Creek, Calif.

Andrea Laird, Commander Laird’s daughter, said she has spoken with her father about the VJ Day anniversary. The coronavirus pandemic has cancelled many of the day’s planned remembrances, she lamented.

“He was really disappointed that COVID got in the way of the celebration in Washington, D. C,” the younger Laird said.

“I flew right up to the day they retired me,” her father said. “I had a great time flying in the Navy.”

The elder Laird, a former Navy aviator, was able to fly at previous anniversary gatherings, even though he no longer drives, his daughter noted. In a recent interview, he talked long and in detail about flying against both German and Japanese pilots.

In fact, Laird is the only U. S. Navy Ace able to boast of combat victories in both the Pacific and European theaters of the Second World War.

“As a child, I never knew he was a fighter ace,” Andrea Laird said. “I learned that when I was an adult, married with kids. He didn’t make a big deal of that at all.”

“I don’t need to be thanked,” Commander Laird said. “I was happy to do it.”