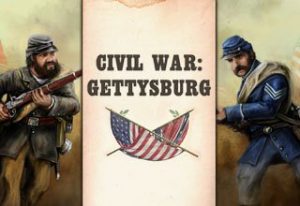 The Battle of Gettysburg, seen by many as the most important fight during the Civil War, was fought for three days from July 1 to July 3, 1863. It was a huge victory for the Union against General Robert E. Lee’s Confederate troops, as it stopped them from invading the northern territories. It was also this battle that inspired one of the most iconic speeches in history, Abraham Lincoln’s “Gettysburg Address”.

History
When, Where, and Who?
The Battle of Gettysburg was a confrontation that took place on July 1, 2 and 3 of 1863, during the American Civil War. It was fought between the Union and Confederate troops, in the town of Gettysburg in Pennsylvania. It was a turning point for the Union Army, who won this battle after a big defeat.

Summary
Following a successful invasion and battle against the Army of the Potomac in May of 1863, General Robert E. Lee decided to lead his Confederate Army into a second invasion of the northern territories, going further into Pennsylvania, in what he called the Gettysburg Campaign. With this plan, he wanted to gain the admiration and support for the Confederacy by France and Britain, and also gain the support of those northern politicians who were still against the war.

After the Union’s defeat at Chancellorsville, Lincoln replaced commander Joseph Hooker with Major General George Gordon Meade, whose first order was for the Union troops to follow Lee’s army into Pennsylvania.

Hearing about this pursuit, Lee’s strategy was to organize his army in the strategic crossroads of Gettysburg. However, when his troops arrived at the town, on July 1, they were met by two Union cavalry brigades. Still, the Union forces were outnumbered, and were driven away into Cemetery Hill by the Confederate troops. Wanting to take advantage of this, Lee ordered his troops to attack Cemetery Hill before Union reinforcements could arrive, but Richard Ewell, who was in command, refused to do so, earning him a bad reputation among the Confederacy. Meanwhile, during the night, four Union corps arrived, strengthening the defense lines.

On July 2, with the Union troops’ defense lines spawning from Culp’s Hill to Cemetery Ridge, Lee ordered James Longstreet to lead his troops to attack the Union on the left, while Ewell and his men should attack the right. Following several hours of heavy fighting, the Union managed to stave off and stall their attackers but lost some of their positions. Both sides suffered many losses on the battle that day.

It was on the morning of July 3 that Union troops pushed back Confederate forces on Culp’s Hill and gained back their positions. Thinking his troops were close to victory, Lee sent 15,000 men to attack Cemetery Ridge, where the Union had dug-in their positions in vast fields. Pickett’s Charge began at 3 p.m. and the Confederate troops were quickly surrounded on all sides, with only half of their men surviving the attack.

On July 4, a defeated Lee withdrew his army, and the Union celebrated the major victory of the Battle of Gettysburg. This was one of the key victories for the Union, as it presented a stepping stone to their victory of the Civil War.

The Battle of Gettysburg had the biggest number of casualties of any battle fought during the Civil War, with 51,000 casualties overall from both sides.