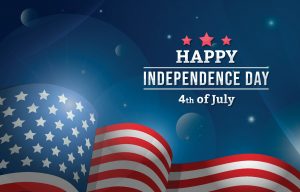 Independence Day is celebrated every year in America on July 4th, hence why it is also known simply as The Fourth of July. The day commemorates the adoption of the Declaration of Independence, signed by all 13 colonies, and which marks the beginning of American Independence. It is a federal holiday, and as such businesses, schools and federal offices are closed. If the 4th falls on a weekend, it is observed on the previous Friday or the following Monday.

The history of Independence Day
The American Revolutionary War began in April of 1775, at a time when Americans were unhappy with the British ruling of the colonies, and started wanting independence from Great Britain. This hostility towards the country was furthered in 1776 with the publication of Thomas Paine’s pamphlet titled “Common Sense”.

On June 7 of the same year, a Congress with representatives from all colonies met in Philadelphia, and it was here that Richard Henry Lee made a compelling argument in favour of the colonies’ independence from Britain. So, a committee was formed, comprising five American household names: Thomas Jefferson, John Adams, Roger Sherman and Benjamin Franklin, who were tasked with drafting a formal document declaring the independence of the colonies from Great Britain, with the intent of forming their nation. Because of his favourable political background, and having written other statements in the defense of the nation, Thomas Jefferson was the one who wrote most of the declaration, with the others helping with the revision and improvements.

After its completion, Congress unanimously cast their votes in favour of the Declaration of Independence on July 2nd, and it was officially adopted on July 4th.

The Declaration of Independence contained five sections, the introduction explained why the independence of the colonies was vital for Americans, and the body numbered all the complaints they had against the British Crown rule.

On July 8th 1776, the Declaration had its first public reading and brought a feeling of relief and victory to the young nation. The day of July 4th has been since known as America’s Birthday.

Early Independence Day celebrations
Before gaining independence, the colonies had a tradition of celebrating the British King’s birthday, by throwing parades and bonfires and giving speeches in his honor. However, in 1776 these traditions were cast aside, and in the resurgence of their freedom, they began holding fake funerals for the monarch, symbolizing the end of the monarchic control in the colonies.

From the beginning, fourth of July celebrations have taken the shape of concerts, bonfires and parades, as well as the public readings of the Declaration of Independence. The first annual Independence Day celebrations were held in Philadelphia on July 4th 1777, even though the war was still taking place.

Why is Independence Day celebrated?
Massachusetts was the first state to make July 4th into a state holiday in 1781, before the war was won by America.

The fourth of July quickly became the American holiday to be celebrated with the most fervour, as it marks the biggest victory for the country: earning their independence. After the war, people celebrated the day as there was a brand new feeling of unity amongst all Americans and their new governors.

The origins of the holiday
July 4th was officially made a federal holiday by Congress in 1870, even though States already held a state holiday on the day. In 1941, a law was passed turning it into a paid holiday for federal employees.

The holiday has become a bigger symbol of patriotism over the years.

Independence Day today
Today, the fourth of July is one of the biggest celebrations in the country. People hold many family celebrations, by organising picnics and barbecues and celebrating American political freedom.

Traditionally, this is the day for eating competitions, of food such as pies and hotdogs, and sports, like baseball, the big American game.

People will decorate their homes with the American flag, hold fireworks displays and listen to patriotic music or watch American movies and films.

Independence Day is mostly a day to commemorate the history and heritage of the American people, and above all to pay tribute to those of the first American generation who fought for their freedom.