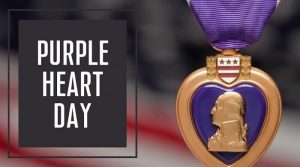 The holiday was first observed in 2014, and is considered an unofficial observance meaning that businesses, government offices, etc. do not close on this day.

How Purple Heart Day is Observed

Criteria For Receiving A Purple Heart

The Purple Heart has a long list of criteria for eligibility-too long to list here. But in general it may be awarded to members of the Armed Forces of the United States who have been wounded, killed in action, or have died or may die from wounds received in any action against the United States, action with an opposing armed force, the results of any hostile “foreign force” and many other situations where men and women in uniform may find themselves under attack.

The Military Order of the Purple Heart (MOPH)

Purple Heart Recipients can join The Military Order of the Purple Heart (MOPH) which was formed in 1932. It is composed exclusively of men and women who have received the Purple Heart and is the only veterans service organization with only “combat” veterans as members. It’s estimated that more than a million Purple Hearts have been awarded and there are about 45,000 MOPH members today.

Why is the Purple Heart Purple?

History of The Purple Heart’s Long And Winding Road

The Purple Heart began as something called the Badge of Military Merit, an honor created by General George Washington in 1782. The honor was only presented to enlisted soldiers who had performed a “singularly meritorious action.” Only a handful of these were awarded, and following the American Revolution, the Badge of Military Merit didn’t become a permanent fixture among the various other awards and decorations given to those who serve.

But the spirit of the Badge of Military Merit would be honored again in 1932, when the Purple Heart award was created to honor the bicentennial of George Washington’s birthday. World War One saw the first Purple Hearts awarded to soldiers, presented on the site of the final encampment of the Continental Army in Windsor, New York.

The Purple Heart took many years to evolve into what it is known as today. When General Douglas MacArthur signed General Order #3 establishing the modern Purple Heart, it was not authorized to be awarded to anyone except to those serving in the Army or the Army Air Corps. A presidential order signed in 1942 opened the Purple Heart to all branches of the military including the U.S. Coast Guard.

World War Two saw the Purple Heart change from an award for meritorious service to one honoring those who were wounded or killed in combat. Criteria for receiving a Purple Heart has also changed over the years; military members may be eligible for this honor if they are wounded or killed as a result of an act of terrorism or in qualifying circumstances where friendly fire was involved. There are also Purple Heart benefits afforded to the men and women that are awarded Purple Hearts.