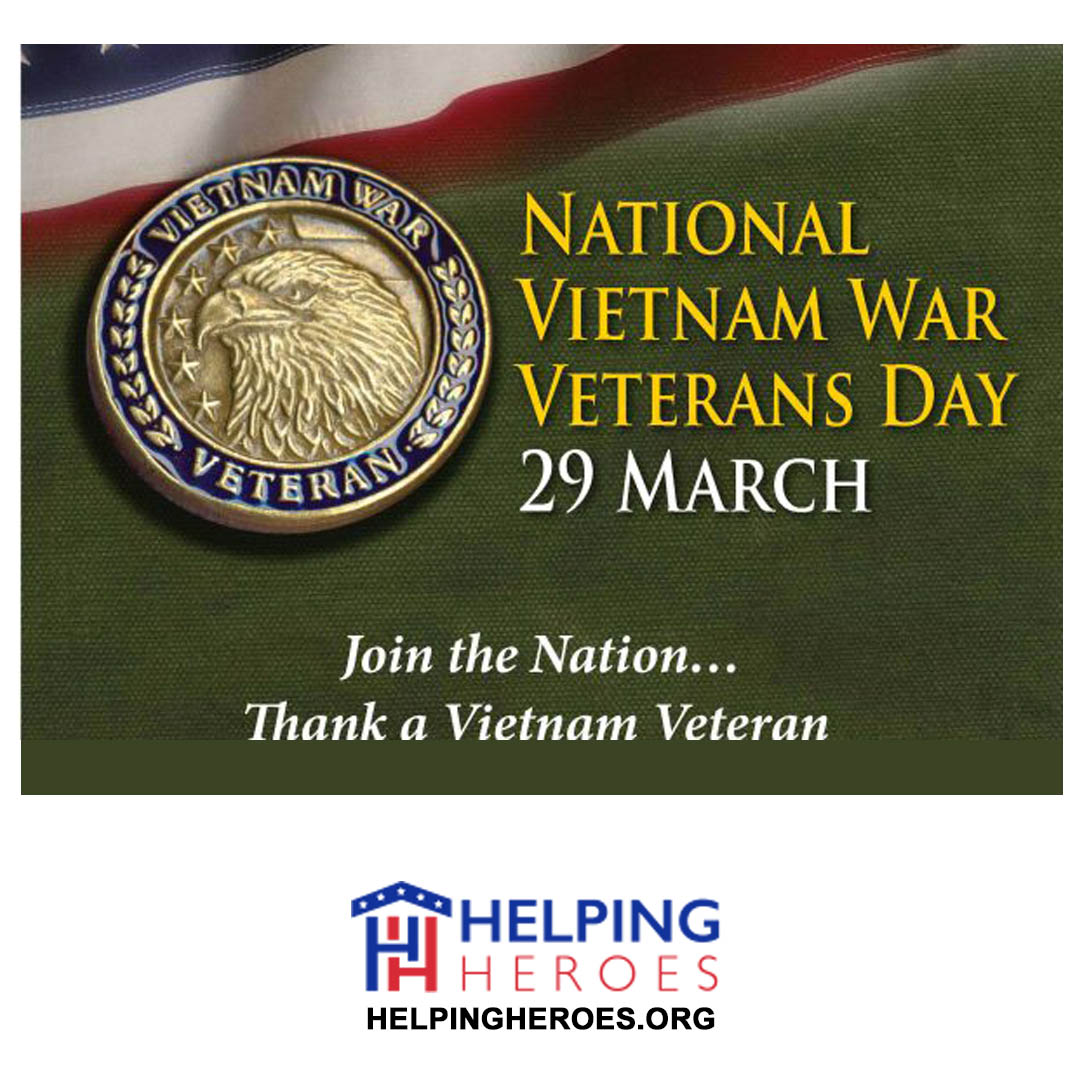 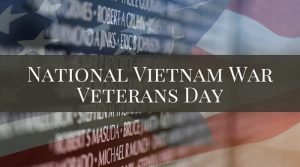 National Vietnam War Veterans Day is observed every year on March 29 and is a way to thank and honor our nation’s Vietnam veterans and their families for their service and sacrifice. There are 5 objectives with Vietnam Commemoration and the other four are:

Highlight the service of our Armed Forces and support organizations during the war
Pay tribute to wartime contributions at home by American citizens
Highlight technology, science and medical advances made during the war
Recognize contributions by our Allies
National Vietnam War Veterans Day will be observed on Tuesday, March 29, 2022.

Organizers canceled or postponed many events to slow the spread of COVID-19 through social distancing. Veterans are encouraged to stay connected and participate in virtual events.

Vietnam Veteran Lapel Pins
The Vietnam Veteran Lapel Pin has become “a lasting memento of the Nation’s thanks.” Living U.S. Veterans who served on active duty in the U.S. Armed Forces at any time during the period of Nov. 1, 1955, to May 15, 1975, regardless of location, are eligible to receive one lapel pin.
Normally, these lapel pins are presented during a dignified, public ceremony to individual Vietnam Veterans. However, given the global pandemic, most commemorative events have been postponed, while others have been rescheduled for next year.
As a unique alternative during this challenging period, The Vietnam War Commemoration is encouraging Vietnam Veterans to submit a request for their lapel pin via email at whs.vnwar50th_events@mail.mil. At the earliest opportunity, Veterans will receive a lapel pin in the mail.

Team RWB Vietnam War Veterans Day Challenge
In recognition of all who served in the Vietnam War, Team RWB is offering a virtual Vietnam War Veterans Day Workout of the Day (WOD). The challenge includes exercises like squats, push ups, and a run or walk. Veterans can complete the challenge at home on their own schedule, at their own pace, alone or with a partner. Team RWB asks participants to give it their all and to pause, remembering those who served and sacrificed.
Access the challenge through the Team RWB App or at TeamRWB.org.
Who Does Vietnam War Commemoration Honor?
U.S. Armed Forces personnel with active duty service between Nov. 1, 1955 to May 15, 1975, regardless of location of service which includes:

Nine million Americans serving during that time
6.4 million Americans living today
2.7 million U.S. service members who served in Vietnam
58,000 whose names are memorialized on a black granite wall in our Nation’s capital
304,000 who were wounded
1,253 Missing in Action (MIA) heroes who have not yet returned to American soil
2,500 Prisoners of War (POWs)
The commemoration makes no distinction between veterans who served in-county, in-theater, or were stationed elsewhere during those 20 years.

Over 11,000 local, state and national organizations, businesses, sports franchises and governmental agencies, including the Department of Veterans Affairs, have committed to be commemorative partners to hosting ceremonies, programs, events and activities that commemorate the 50 year anniversary of the Vietnam War.

Wreath laying ceremony at The Vietnam War Memorial “The Wall”
Ceremonies and activities at VA Medical facilities across the country
The National Cemetery Administration (NCA) will recognize, honor and thank Vietnam era veterans and their families with commemorative ceremonies