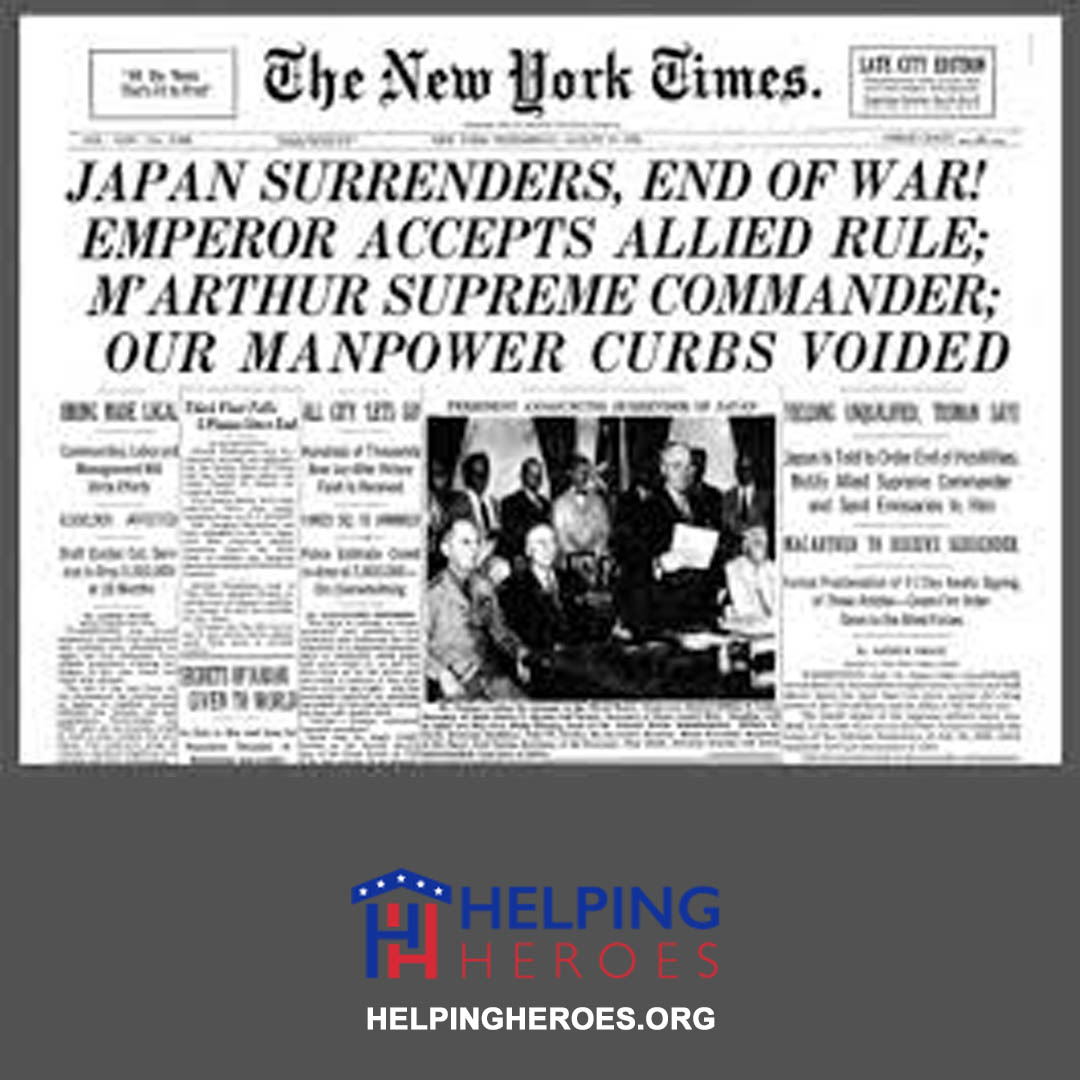 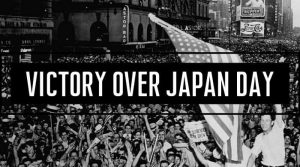 September 2, 1945, is the American date of VJ Day. Also known as Victory Over Japan Day, this date marks the formal surrender of Japan in World War Two aboard the USS Missouri in Tokyo Bay.

VJ is officially observed in the United States on September 2nd every year. In Britain, the date of VJ Day is listed as August 15, 1945, when the announcement of Japan’s surrender was made, but America’s VJ Day is when the actual surrender documents were formally signed.

Japan’s surrender on September 2nd is notable for several reasons: the nation had never surrendered to a foreign power before this, and VJ day also marks the final end of World War Two.

These alternate names became part of the vernacular in some areas due to Japan’s rising importance as a global economic power, other versions of the VJ Day name may come out of a sense of community with Japanese-Americans.

Still other “alternative observances” for of what President Truman announced as Victory In Japan Day are held during national holidays such as Memorial Day or Veterans Day, the idea being that all military victories are honored on such occasions instead singling out an individual battle or military accomplishment.

How Is VJ Day Celebrated?
At one time, VJ Day was celebrated nationwide. But many sources report this custom falling out of favor due at least in part to sensitivities related to Japanese-American communities in general, but also American treatment of Japanese-Americans during the war.

The unfortunate history of World War Two-era round-ups, internment camps, discrimination, fear and mistrust by non-Japanese neighbors and communities in America is a dark chapter in the history of the era.

The World War Two-era American distrust of Japanese and German Americans, in general, has brought much remorse and re-thinking in the decades following the war; it is not surprising that celebrating VJ Day would be downplayed as a result.

Instead of VJ Day, some choose to celebrate the subsequent partnership between America and Japan that includes joint military cooperation, economic partnerships, sister cities between Japan and America, etc.

In Japanese cities with U.S. military bases such as Misawa Airbase in the Aomori prefecture, there are summer celebrations sometimes known as “America Day,” showing how two global powers once at odds on the world stage have come together to work toward the future.

Why Is VJ Day Important?
To understand the importance of VJ Day, it’s necessary to know its’ historical context. There was no guarantee Allied forces would be able to defeat Japan-the early days of Japanese involvement in World War Two saw major early successes by the island nation.

But serious miscalculations and (in hindsight) poor tactical choices gave Allied forces the openings needed to stop the momentum of those early victories by Imperial forces.

A Brief Timeline Of World War Two
In 1939, several events occurred that led to the beginning of World War Two, starting with the signing of a non-aggression pact between Russia and Germany, paving the way for Hitler to begin the invasion of Poland. Two days after this invasion began in September 1939, France and Britain declared war on Germany.

In the six years that followed, an estimated 50 million or more were killed including some six million Jews who were held as prisoners in Nazi camps as part of Hitler’s so-called Final Solution. Victory In Europe Day would mark the official surrender of Axis forces to the Allies on May 8, 1945. Adolph Hitler would never answer for his crimes, having committed suicide in a bunker in April 1945 in a Berlin bunker. But many Nazi officials would be put on trial for war crimes at Nuremberg in the years following the war.

A “primary surrender” was signed on May 7, 1945 with the formal surrender signed May 8, Victory in Europe Day. German forces occupying the Channel islands would surrender the following day.

Germany, Russia, and the rest of Europe were not the only countries to become embroiled in the war. Japan’s involvement would prolong the war’s final end until September 1945.

Japan’s Involvement In WW2
In 1940, Germany, Italy, and Japan signed an agreement known as the Tripartite Pact, which put all three countries in an agreement to help one another out if attacked by forces not already involved in World War Two.

America, which had not yet entered the war, had placed economic sanctions (including oil and fuel embargoes) on Japan, designed to weaken its’ ability to attack its’ neighbors. Roughly a year after the Tripartite Pact was signed, Japan attacked the United States at Pearl Harbor.

U.S. Navy and Consulate General of Japan Honor the Lives Lost on Oahu in 1941
U.S. Navy photo by Mass Communication Specialist 1st Class Randi Brown
December 7, 1941, was declared as a “day of infamy” by President Franklin Roosevelt in the aftermath which saw 18 American warships damaged or destroyed and more than 2,400 troops killed.

More than 350 Japanese planes had launched against Pearl Harbor. The United States declared war on Japan soon after. President Roosevelt asked Congress to pass a resolution stating such. Between the votes in the House and Senate, only one elected official dissented against the declaration of war; a pacifist who also voted against American participation in World War One.

Soon after the declaration of war against Japan, the United States found itself on the receiving end of war declarations from Italy and Germany. The U.S. was officially embroiled in World War Two.

The Solomon Island campaign in 1942 proved costly for Japan; there is talk among World War Two historians attributing Japan’s defeat at Midway (see below) and its’ losses in the island campaign as being responsible for an overall weakening of Japan’s military.

The Battle Of Midway

Midway is one of the major turning points of World War Two where the American and Japanese conflict is concerned. Japan wanted to lure American forces into a conflict over a small atoll that was farther away than American aircraft of the day could reach if flying from Hawaii. It was also assumed American aircraft carrier strength was weaker than it actually turned out to be.

That and other miscalculations at Midway proved to be costly to the Japanese war effort.

It’s important to put Midway in proper context-this decisive battle occurred only six months after the attack on Pearl Harbor. There was an assumption in the Japanese chain of command that American forces were demoralized and weakened in the wake of this attack, loss of Wake Island, and other setbacks.

Japan planned to disperse naval forces en route to Midway in order to conceal its’ strength and lure U.S. carriers into a gun battle with a lead attack group; it had backup warships trailing hundreds of miles away intended to mop up following the initial fight with the main carriers.

American intelligence had cracked Japanese codes used to discuss war plans long-distance and the plan was anticipated. The entire plan wasn’t known, but enough of Japan’s planning for the battle was understood to permit American intelligence to broadcast false information designed to further lure Japanese planners into a false sense of security before the attack.

The Battle of Midway started on June 4 and would last until June 7; a great many factors contributed to the American victory there and was considered the turning point in the war.

Devastation To The Japanese Fleet At Midway

Japan’s losses included more than 3,000 troops aboard aircraft carriers, destroyers, and heavy cruisers. Four Japanese carriers were sunk or destroyed. American losses were far smaller-just over 300 casualties and the loss of the USS Yorktown and the destroyer USS Hammann.

Japan would never regain air superiority; another Pearl Harbor-style attack would be impossible for Japanese forces at this point in the war.

After the Battle of Midway, U.S. forces were able to take an offensive position against Japan, which had forces in a variety of island nations, atolls, and other small land masses.

Prior to this, the only significant bomb runs conducted included Col. Jimmy Doolittle’s famous raid from the USS Hornet in 1942, plus some attacks of island positions at or near the Kuril Islands in 1943.

In 1944, American planes began bombing Japanese cities with conventional munitions. U.S. pilots were often able to fly higher than Japan’s anti-aircraft guns could reach. But the high-flying tactics weren’t as effective against industrial targets as later-used low-flying nighttime bomb raids. Some of the high-altitude raids were more successful as propaganda pieces than they were as military operations.

The riskier low-altitude attacks are said to have demoralized Japanese decision makers. They were also a precursor to a planned invasion of Japan that could have happened in 1945 if it weren’t for the success of the American military’s next significant move in the campaign.

In 1942, America was devoting a significant amount of resources toward the development of an atomic weapon to be used in World War Two. Germany had conducted heavy water experiments but didn’t manage the same breakthroughs that were made in America. Nazi war criminal Albert Speer’s memoir Inside The Third Reich, mentions that Germany’s nuclear project was “scuttled” by the end of 1942.

In July of 1945, the Trinity atomic test resulted in practice runs for a nuclear strike on Japan; several cities were named as targets including Hiroshima and Nagasaki. Kyoto, Japan was on that list but was later voided as a target due to Kyoto’s cultural value.

In July of 1945, Allied forces issued something called the Potsdam Declaration, which demanded the unconditional surrender of Japan, which was refused.

On August 6, 1945, the B-29 Enola Gay dropped the atomic bomb since known as “Little Boy” on Hiroshima. Approximately 80,000 people immediately died as a result of the bombing but the final death toll from fallout, radiation sickness, and collateral damage may never be accurately known but is listed in the tens of thousands.

On August 9, 1945, the B-29 Bockscar dropped the atomic bomb known as “Fat Man” on Nagasaki. 100,000 people died as the result of the use of this single munition. The final death toll from radiation and collateral damage may never be accurately known. August 9, 1945, is also the same day that Russia declared war on Japan.

Japan Surrenders
On August 10, 1945, the Japanese government began negotiations of surrender with the United States. Five days later, the Emperor of Japan made an announcement via Radio Tokyo that the nation had accepted the terms of the Potsdam Declaration.

President Truman addressed the nation on August 14, 1945, that a formal surrender would occur on September 2nd and that while the war was over, a formal declaration of Victory In Japan or VJ Day would have to wait until the formal surrender papers were signed in September aboard the USS Missouri.